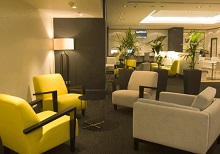 On an earlier project, IEL had undertaken the design and programming of the lighting control system for Emirates in their new lounge at Auckland Airport. The construction of this new area meant their original lounge became vacant.

Auckland Airport elected to retain the original lounge, and re-named it the Emperor Lounge, to provide a restful location for passengers in transit.

The Emperor Lounge had an existing C-Bus lighting control system, which IEL were able to ensure was fully back compatible with the new touchscreen installed by the electrical contractor. Intelligent Environments Limited re-programmed the equipment to suit the new requirements, as well provide accessibility for future changes by the client. DALI’s Contribution to IoT Lighting Control In an IoT world, DALI has a lot to offer. The connectivity requirements of IoT-based lighting control applications are...